James Bond chess with Kronsteen (or Number 5). He is a member of  S.P.E.C.T.R.E, a criminal organization. He is in charge of the plan to steal a decoder from the Russians with the use of British and Soviet agents. 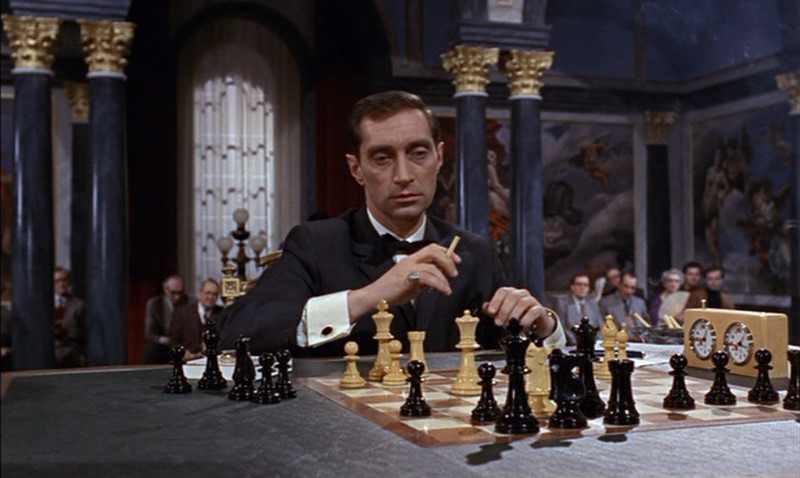 "To the public, Comrade General, I am a professional chess player. If, with only three minutes to go, I had received a message that my wife was being murdered outside the door of the tournament hall, I would not have raised a finger to save her. My public know that. They are dedicated to the game as myself. Tonight, if I had resigned the game and had come immediately upon receipt of that message, 5000 people would have known that it could only be on the orders of such a department as this. There would have been a storm of gossip. My future comings and goings would have been watched for clues. It would have been the end of my cover. In the interests of State Security, I waited three minutes before obeying the order. Even so, my hurried departure will be the subject of much comment."

Stunningly photographed in historic Istanbul mosques, Venice and aboard the Orient Express, this explosive Bond epic stars the legendary Lotte Lenya and Robert Shaw as killer stalking the hero for "just the right blend of tongue-in-chill" (Los Angeles Times)

In this movie we get to see a very young Vladek Sheybal at his debut. We can appreciate the great actor he is. It makes us wish he would have got a bigger part. The part he got had a lot of face expressions and good dialogues.

Vladek plays a villain named Kronsteen (or Number 5). He is a member of S.P.E.C.T.E.R., a criminal organization. He is in charge of the plan to steal a decoder from the Russians with the use of British and Soviet agents. Without their knowledge of course. He will get the help of Rosa Klebb (Number 3) whose character is played by Lotte Lenya, who will become a very good friend of Vladek's.